THIS WAS THE ELEVENTH SEASON WITH ZERO ENTRY FEES for QUALIFIED players. Plus, we again allowed players to be ELIGIBLE even though NOT Qualified (cost to them was only $15 per tourney). This is winning formula which we continue until we can come up with something better. Hopefully, as the economy begins to improve (if at all), ‘The Circuit’ will see an increase in participation as a result and then these season-end Dartistries will get BIGGER. For now, ‘The Circuit’ is still providing TWO ‘DARTexciting’ weekend events for everyone who DESIRES to take advantage of them.

As we have every season, we held a Dartistry Warm-Up Tournament on Friday Night @ The Billiard Den with an Extra $200 added on top of the clubs’ normal $5 pp Add. with 56 players. The total ADD was $440 with a Payout of $872 to the Top 4 finishing teams. See results below. This is the Official Opening Night of the Dartistry Championships, however it is played like a Regular Circuit tournament with the results being posted on the Circuit’s Website and everyone’s participation also counts toward the 27th Dartistry Season.

We started this season’s Dartistry with a 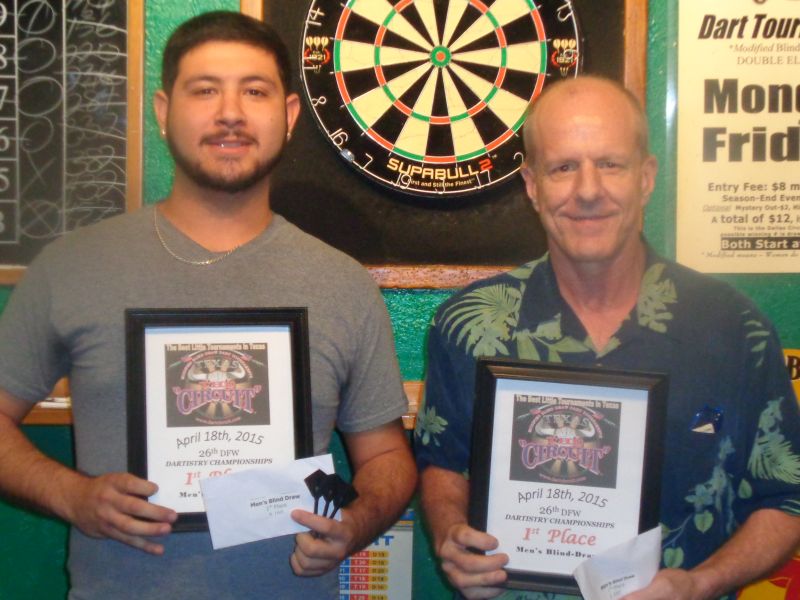 Modest Showing. Lots of people were out of town or a kids’ weekend. Hopefully, there will be more next season. 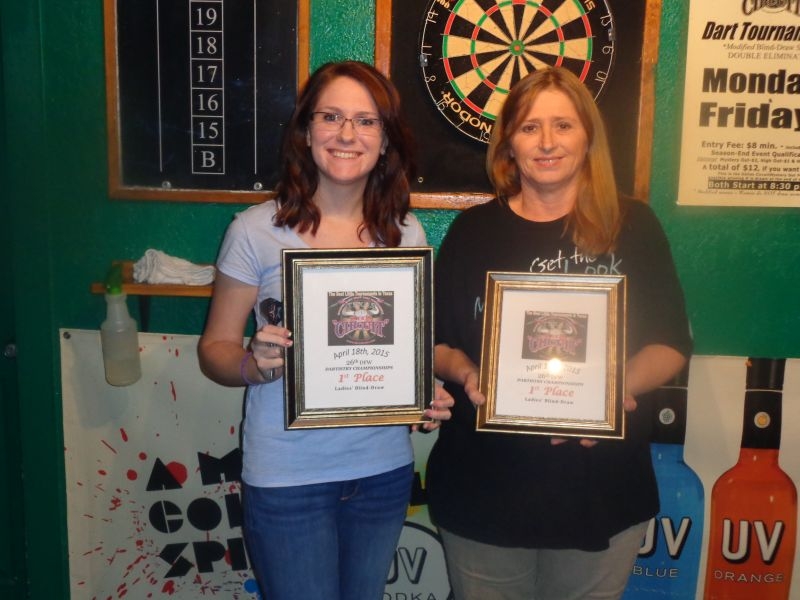 Between the Men’s & Ladies Blind-Draws we played some Quick SINGLES tourneys to keep everyone busy and having fun until the 7:00 pm Modified Draw. Time allowed us to play FOUR (4) of these 8 player, single elimination, $5 Entry, and 2 Player Payout tourneys.

I really like using the Eligible Players Entry Fees as scorekeeper/chalker prizes. It allows us to pay out in cash LOTS & LOTS of $5 chalker prizes throughout the day. This time there were $400 worth of CHALKER (scorekeeper) PRIZES WON during this Dartistry and awarded to those who worked to keep the tournaments moving quickly and smoothly. Included in this prize fund is our GRAND CHALKER PRIZES at the end of each tourney which were donated by The Billiard Den as a thank you for playing in this event.

Each season-end event has its own qualities and at the end makes up its own story and character. Many of the individual participants are the same each season, but the different combinations of players and personalities creates different, interesting, and exciting situations that are unique and memorable. This Dartistry was no exception to the above. Although, unlike last season where The Den also had a Pool Tourney; this time, WE HAD THE PLACE TO OURSELVES. AAHHH, elbow room. We used all the Den’s Dart areas, including the Ladies’ Lair (Man Cave) as well as the main area and back three boards. It ran smooth with no unwanted and nasty ‘Drama’.

The Biggest thank You always goes to my loving and adorable wife, Sara, for her tolerance of me during the preparation time for this event and during the weeks before when I’m running the nightly tournaments.

Each Dartistry for the last 10 seasons, I’ve had the pleasure of having Candace Neal as my co-director for this event. Thank you, Candace, for your tireless help. I know I said this LAST SEASON, but it’s worth repeating. “Your help every Dartistry makes this whole event so much easier to manage and enjoy by sharing the Director responsibilities. It’s nice to KNOW that you have MY and the PLAYERS BACKS, if I’m away. We have developed an ‘in charge’ symbiotic personality wherein we both like being in control telling the players where to go and what to do, and yet the players seem to like it. LOL. Thanks, again.”

Excitedly, Valerie Goad joined us for a little while behind ‘the table’ this weekend. Valerie is becoming an integral part of The Circuit as she has now taken over as the Tuesday Night Director @ Austin Ave 2 in Richardson. Valerie has proven herself to be another DART FANATIC with the Passion to Play & Promote. She is one of the most talented and respected players in DFW and the other players follow her direction. Hhhmmm, could she be my eventual replacement?

Once again, THE BILLIARD DEN comes through as ‘the’ place to hold The Dartistry. At this time, there is still NO OTHER Venue in town which ‘fits the bill’ as the seasonal location for the ‘Whole’ of this event. If the event ever gets bigger, again, we could hold a continuation tourney(s) at another club on Sunday. I sure hope that happens and I’m actively trying to ‘make it so’. Thank You, Marcy for being prepared for this event. You and your staff (too long to even list them) continue to provide excellent service.

On behalf of the Dart Players and myself, THANK YOU, Jennifer & Tracy, for all your outstanding, double shift, long tiring day, and dedicated service. I know you both volunteered for this, so I surely hope the players tipped you well. Thanks girls.

A special ‘Thank You’ to, Danny Brown, for your PRIZE DONATIONS of THREE “FREE Oil Changes” at your store in Mesquite. The lucky winners were Glenn Goad (2) and Daniel McKittrick.

And of course a HUGE Thank You to ‘YOU, The Players’, for your continued participation each and every season. It’s great to know, I’m still providing a service you appreciate and support. You’re all like ONE BIG FAMILY to me. Thanks.

OK! How did the weekend go? It went WELL!

The weekend started off with our USUAL Friday Night Dartistry Warm-Up Tourney where everyone has their final opportunity to become ‘Eligible and/or Qualified’ for the Main Event on Saturday. I love this phrase …. “It ignites the ‘BURN‘ and the ‘YEARN‘ for a great weekend of ‘DARTS‘! “. It has been and will continue to be a part of the Dartistry program.

On Saturday, we were all ready to go by Noon when the Den’s doors opened. Players started showing up a few minutes before that to Practice before Saturday’s Dartistry Tourneys began at 1 pm with the Men’s & Ladies Blind Draws.

Both tourneys moved smoothly, as usual. Oops another ‘self pat on the back’. Although, I’m sure that all the score keeper prizes helped make that happen. It was fun giving away lots of various prizes to so many people who kept claiming score boards to chalk. Quite the opposite of the nightly tourneys, except when we ADD the $1 to the entry fee and give it ALL AWAY to those who keep score. That is something to consider being used more often.

Most of the memorable moments in this season’s 26th Dartistry Championships are captured in my mind and can be played back for me to see; just as your ‘mm’ can be seen & enjoyed by you. Although I will make a ‘Special Note’ that both Morgan McCormack and David Garza, who won the Modified Blind Draw on Saturday Night, ALSO WON their appropriate DOUBLES tourneys, as well. I did take some photos and will eventually post them on ‘Facebook’ and the NEW WEBSITE. I hope they will stimulate your memory cells and allow you to recall many of hours of the good times you had at this Dartistry.

The Circuit’s NEW WEBSITE is almost finished and should be LIVE, soon. Thank you for your patience. This new site will be more information designed, at least in the beginning. Everything should be more organized and easier to find when it’s all completed. It is still ‘a work in progress’! All suggestions that would ENHANCE your onsite experience and help you navigate the site will be considered. Please, don’t hesitate to share your ideas.

See you on the boards!
David Lloyd, Director

What’s the Mystery Out?

the Mystery Out Pot is

the Triple Pot is

Where to Play Today!

Friends of the Circuit